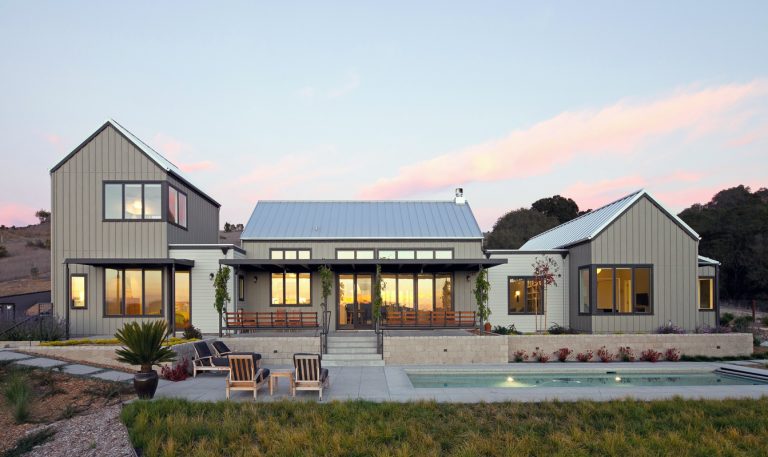 Love the sight of gables, roomy porches, large fireplaces, and an iconic American rural aesthetic? You might be dreaming about living in a modern farmhouse.

But you may have a lot of questions about farmhouses. What defines this style of architecture? How do contemporary farmhouse style homes differ from their traditional counterparts?

In this guide we will answer these and other questions about farmhouses, and share some stunning farmhouse floor plans with you to consider.

What is a Farmhouse?

The answer to this question might surprise you. Many people assume that “farmhouse” is a formal architectural style. It actually is not.

A farmhouse is simply a house built on farmland. Historically, many of these houses had similar architectural features, which is why there is an iconic farmhouse “style” we can identify.

Here are some of the features that are common among many traditional farmhouses:

None of the features above are givens. Again, these are just typical of traditional farmhouses. There are always exceptions and variations.

What is a Modern Farmhouse?

A modern farmhouse is a house that is built in a style based on those common among traditional farmhouses.

But unlike a traditional farmhouse, it may or may not be a functional, actual farmhouse.

In other words, a modern farmhouse does not need to be located on a farm. It can be, but it is not a requirement.

You can place a modern farmhouse in the country, but you can also build one in a more densely populated area.

A farmhouse can go in the city, but you will encounter them more frequently in suburban or exurban areas, since there is more room there, and these houses are often (though not always) on the larger side.

You will typically see:

Open floor plans are popular with respect to modern farmhouses, more than they were with traditional farmhouses.

Is a Modern Farmhouse the Same as a Barndominium?

If you are looking into modern country houses, one other type of home that may interest you is a barndominium. In fact, you may be wondering if a barndo is the same thing as a modern farmhouse or not. The two can sometimes look similar and distinguishing them from one another is not an exact science.

While there are often some commonalities between the two, barndominiums are not the same thing as modern farmhouses, although we could consider them to be overlapping categories.

A barndominium is specifically a barn that has been fully outfitted with the utilities and comforts you need for full-time residential living.

You can convert a working barn into a home, or you can build a barndominium from the ground up to serve as a home from the start.

A barndominium on a working farm, past or present, would be a farmhouse. But it would also still be a barndominium.

Is that clear? We understand it is anything but clear. We are trying to make a point here about the degree the two styles overlap.

Barndos and modern farmhouses do often have the following features in common:

Indeed, if a barndominium has enough features in common style-wise with traditional farmhouses, we could classify it as a modern farmhouse even if it is not on a farm.

Type to search or hit ESC to close
See all results